When I do look at myself online, the ‘me’ who’s looking is evolving just as much as – if not more than – the ever-changing persona(s) on the screen. There can be no clear-cut online/offline separation in a world where digital media is ‘invisible, everywhere and always on’ (Martin 2009, p. 160).

I worry about the continued reliance on the idea of the "true self": thinking of identity as performative seems so much more productive… pic.twitter.com/O0bblxv5jR

Popular understandings of digital identities continue to rely on the seemingly stable notion of the ‘true self’ – and you hardly need to raise social media before this problematic category starts breaking down. I find postmodern themes of multiplicity and incoherence far more helpful in thinking about my online activity. The postmodernist emphasis on human identity being underpinned by a ‘fragmented, disjointed, and discontinuous mode of experience’ (Kellner 1995, p. 233) gestures to radical shifts that have only been exacerbated by the online world. Such shifts might occur between, for example, sending formal emails as a university lecturer one moment, to creating self-reflexive and conversational live video broadcasts for students the next, to sending a snap to my brother, just cos…

Having several Twitter profiles allows me to make this kind of self-presentational shift even more rapidly, clicking between different accounts on my smartphone in less than a second. One moment I can be producing a tweet from my ‘professional’ profile that acknowledges student initiative and encourages more of the same, and the next I can create a very different tweet from another account that seeks to raise awareness in the area of nonhuman animal welfare, as in the respective examples below:

Dedicating my 8,000th tweet to all past, present & future students who are or will be busy making, sharing, and networking online. The future is yours if you grab hold of it!! 😎#BeActive #ALM102 #ALM201 #ALC701 #ALCalumni #StillLearningByDoing pic.twitter.com/aTYylGR3cU

The idea that any one of these self-presentations is more or less ‘real’ than another seems pretty redundant to me now, particularly after having shifted between different accounts many times a day for a number of years. They are performances, composed with different purposes and audiences in mind, but also attached to each other in a way that they can be traced back to the source – the non-virtual me that increasingly relies on digital minions to represent him to the world. The flexibility allowed by using multiple Twitter accounts to connect with very different publics minimises the possibility of sharing irrelevant and annoying tweets, but does require a consistent effort to stay active across several personas and find the right balance.

It’s important for all social media users to bear in mind the primary reason for engaging in online forums: connectivity – or what C. Waite (2013, p. 16) identifies as an individual’s dependency on ‘virtual copresence’. Thinking critically, creatively, and carefully about how one is situated within virtual communities is crucial to establishing an effective online presence. In other words, the most important consideration of one’s self-presentation on social media should be one’s audience. Asking how one can use social media to contribute value to those around them will invariably bring value for oneself.

In terms of Kim Barbour and David Marshall’s (2012) categorisation of different kinds of academic personae, my online activity places me further from the ‘formal’ and fixed broadcast-style self and more in the ‘comprehensive self’ category. According to Barbour and Marshall, the comprehensive self blurs ‘the professional’ and ‘the private’ across a number of platforms. However, I tend to think of this kind of behaviour as redefining what ‘private’ means – just as social media has done for some time – as absolutely nothing I share publicly online is what I consider to be part of my ‘private life’ (which may surprise those who’ve seen me on YouTube).

The below Easel.ly infographic I made for students in 2013 still symbolically captures some of the connections I make between my online identity(s): 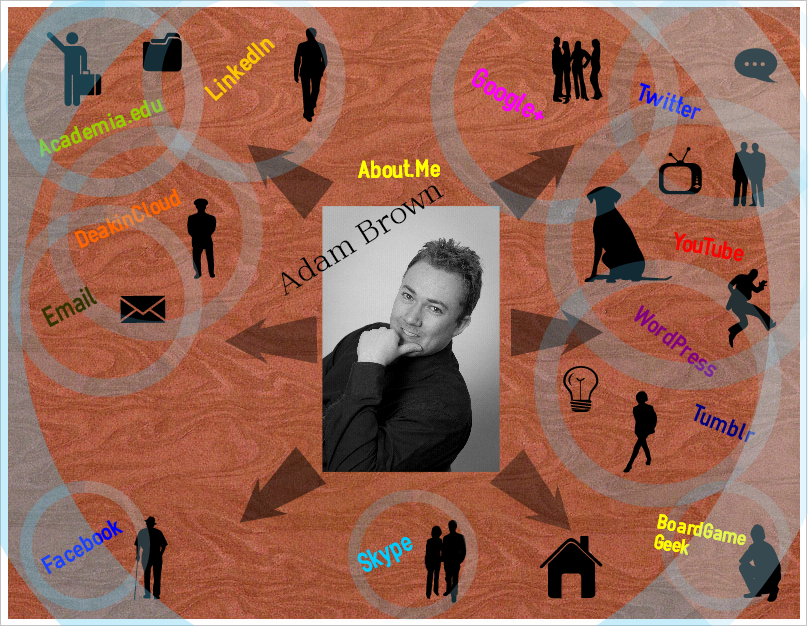 This visual representation makes clear the distinction between those sites that generally compel (through their design and conventions of use) the production of a more ‘serious’ and ‘professional’ persona, such as Academia.edu and LinkedIn, and those on which I construct a more ‘informal’ self, such as YouTube. However, looking again at this compilation several years after its creation, it seems very dated now – both in terms of aesthetic quality (I think students could do much better – hint hint!) and in terms of how since then, more personas have arisen, some have split apart, and others have converged more closely together.

These days I would classify myself according to different performances more so than different platforms. For instance, I consciously and reflexively think through my presentation of self as if playing a series of characters, no matter what platform I’m using. My construction of a multiplicity of selves can be found in my fragmented appearances in my teaching videos (as in the image below), in which I intend to disrupt the still widely commonplace notion of a ‘true self’ with performances that are at once compellingly ‘authentic’ and entirely ‘artificial’.

Reflecting the postmodern conception of the self outlined earlier, recent research has pointed to frequently updated profile pictures as ‘becom[ing] a short hand for changing, up-to-the-minute performances of self’ (Hills 2010, p. 118). However, I don’t tend to change my primary profile picture all that often – particularly on my main account – choosing to use a consistent ‘formal’ image of myself across most platforms to enhance recognisability and searchability. Metaphorically, my profile picture might (as suggested in the infographic above) be viewed as an anchor around which I construct a multiplicity of often contradictory, if not at times ‘incoherent’, online selves. But even that will need to be changed at some point.

Addressing the notion of the ‘intercommunicative self’, Marshall writes of the ‘necessity of linking one’s own identities into some sort of pattern’ (2010, p. 42). This underlines the importance of ensuring one’s various profiles are consistent and linked when and where useful. My About.Me profile, for example, serves as a useful ‘hub’ for these connections; the ‘cross-pollination’ element of such sites is pervasive and highly valuable – if used effectively. Yet no matter how careful one is in depicting oneself online, it is crucial to acknowledge that the self is as much ‘an effect of representation’ as it is something that is ‘expressed through online practices’ (Poletti and Rak 2014, p. 4), which returns us to the theme with which I began.

Just as I influence other people’s perceptions of me through my online behaviour, so too do my virtual personae impact on my own understanding of who I am. An awareness of this is particularly important at a time when images of oneself can be uploaded to any number of sites with impunity, highlighting that one ultimately lacks (total) control over one’s self in significant ways. For example, in one of my seminars in 2014, I sat awkwardly under a table in an attempt to highlight the need to break down traditional power relations between students and teacher. One student in the room took a photograph of me and tweeted it, which I only discovered once the seminar had concluded…

This moment serves to highlight the point I was making in the seminar perfectly: the rise of digital media has already provided the means to disrupt conventional power relations, whether we like it or not. In this case I not only liked it, but retweeted it too!

The future is here. Game on.

Kellner, D 1995, Media Culture: Cultural Studies, Identity, and Politics Between the Modern and the Postmodern, Routledge, London and New York.

Featured image: Screenshot from an old teaching video from 2013, when I was going through my Brady Bunch fetish phase… #sorrynotsorry