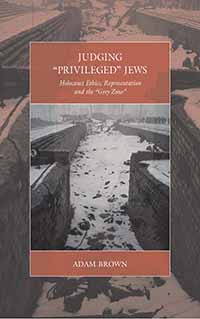 Published by Berghahn Books in August 2013; now available in paperback

‘Brown’s work breaks new ground by providing a sustained and detailed analysis of those Holocaust victims who can be called “privileged” Jews… These men and women… have been “present” in many accounts of the Holocaust, but Brown brings that presence to center stage and sheds important light upon it.’  ·  John K. Roth, Claremont McKenna College

‘This book makes an important contribution to Holocaust studies, particularly to the study of Holocaust memorial culture, to the study of Holocaust film, to what might be called Holocaust ethics, and, to a certain degree, the analysis of Holocaust testimonies. It is readable and largely jargon-free, thoroughly researched and documented… an excellent piece of scholarship: rewarding and instructive at many turns.’  ·  Oren Stier, Florida International University

‘This is an uncommonly well and clearly written book that commands and draws thoughtfully upon a large body of relevant literature… I found it consistently fascinating, even in the few passages where I was not thoroughly convinced.’  ·  Peter Hayes, Northwestern University

The Nazis’ persecution of the Jews during the Holocaust included the creation of prisoner hierarchies that forced victims to cooperate with their persecutors. Many in the camps and ghettos came to hold so-called ‘privileged’ positions, and their behavior has often been judged as self-serving and harmful to fellow inmates. Such controversial figures constitute an intrinsically important, frequently misunderstood, and often taboo aspect of the Holocaust. Drawing on Primo Levi’s concept of the ‘grey zone,’ this study analyzes the passing of moral judgment on ‘privileged’ Jews as represented by writers, such as Raul Hilberg, and in films, including Claude Lanzmann’s Shoah and Steven Spielberg’s Schindler’s List. Negotiating the problems and potentialities of ‘representing the unrepresentable,’ this book engages with issues that are fundamental to present-day attempts to understand the Holocaust and deeply relevant to reflections on human nature.